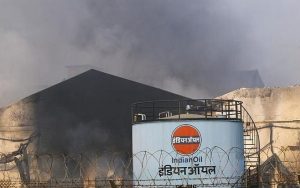 Indian Oil Corporation (IOC), India’s largest oil firm, will build the first ‘green hydrogen’ plant of the country at its Mathura refinery, to meet the growing demand for both oil and cleaner forms of energy. This will be the nation’s first green hydrogen unit. Previously, projects have been announced to produce ‘grey hydrogen’ using fossil fuels such as natural gas.

For this, the company will make use of 250 MW of electricity which it produces from renewable sources like solar power, to produce absolutely green hydrogen through electrolysis. Mathura has been selected by virtue of its proximity to TTZ (Taj Trapezium Zone). Hydrogen is the latest buzz for meeting the world’s energy needs. Hydrogen, in itself, is a clean fuel but manufacturing it is energy-intensive and has carbon byproducts.