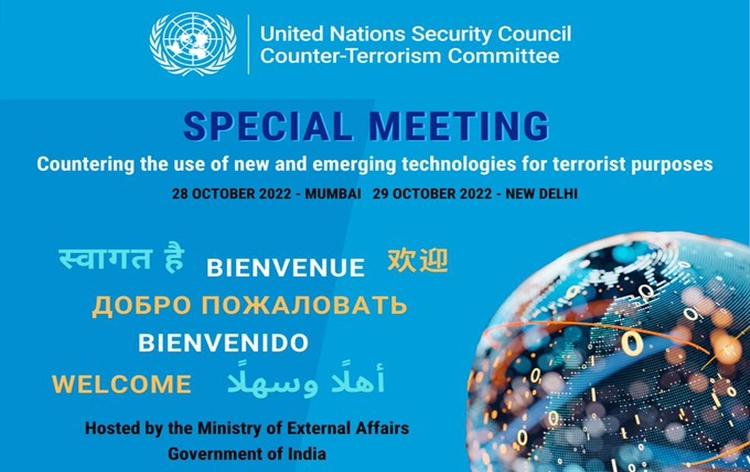 The United Nation Security Council’s (UNSC) two-day meeting in India on counter-terrorism will focus on dealing with use of internet, new payment mechanism and drones by terrorists. The meetings will be hosted in Mumbai and Delhi on 28 and 29 October, respectively.

What The MEA Said:

Ministry of external affairs secretary Sanjay Verma said the overarching theme of the meeting would be ‘countering the use of new and emerging technologies for terrorist purposes’. “It’ll begin with tribute to victims of terrorism,” he added.

Ruchira Kamboj, India’s Permanent Representative to the UN, Counter-Terrorism Committee Chair, said that over the past two decades, member states have made tangible progress in countering terrorism and violent extremism conducive to terrorism. Yet, terrorist threat persists and despite our best efforts has evolved. Mindful of addressing this issue while also recognising potential of technologies to increase effectiveness of counterterrorism efforts, the Committee has come together in India to hold its special meeting on countering use of new and emerging technologies for terrorist purposes, Kamboj said.

“The focus will be specifically on rapid development, growing use by member states and increasing threat of use for terrorist purposes of 3 significant technologies – 1) internet, including social media, 2) new payment technologies and fundraising methods, 3) unmanned aerial systems, including drones,” Kamboj added.

Verma said he larger purpose of this unprecedented meeting of the Counter-Terrorism Committee in Mumbai will resonate with rest of the world because what happened in 2008 was an attack on what would be the identity of India in financial and commercial space.

“A city which reflects the best of India in terms of its economic development in recent years. The fact that the CTC has agreed to begin its deliberations in Mumbai is a message in itself,” the senior MEA official said.

The Importance Of Counter-Terror Meet In India At This Time:

India took over the chairmanship of the CTC as US troops left Afghanistan in as much of a mess as when it entered in October 2001—an unfinished war that has left hundreds of thousands of Afghan civilians at the mercy of a conservative, militant Taliban government; an unabated persecution of women and minorities; and continued, frequent terror strikes. For India, the Pakistani deep state’s decades-old proximity with the Taliban has further threatened its domestic and regional security directly since the withdrawal of US troops, making this tenure at the CTC particularly critical.

India has served as chair of the CTC twice since the Committee was established; first taking over in 2011, less than three years after the horrific Mumbai terror attacks, when the then Permanent Representative and now central minister Hardeep Puri appealed to the world community for a new ‘zero tolerance’ paradigm in the International fight against terrorism.