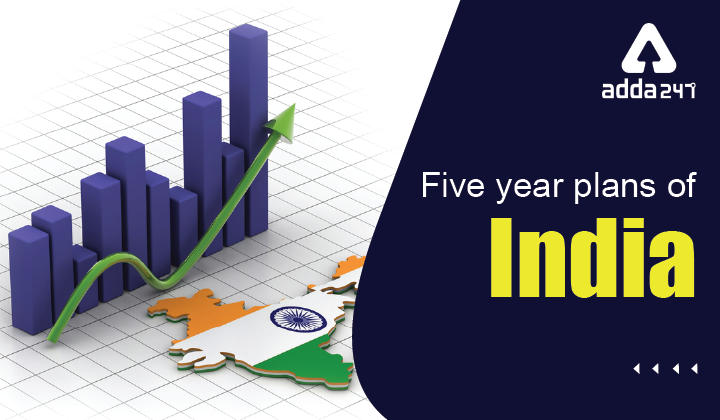 Five-Year Plans (FYPs) are national economic programmes that are controlled and integrated. In 1928, Joseph Stalin implemented the Soviet Union’s first Five-Year Plan. Most communist countries and a few capitalist ones have since adopted them. Under the socialist influence of India’s first prime minister, Jawaharlal Nehru, India established its First FYP in 1951, shortly after independence.

The Indian economy was built on planning from 1947 to 2017. The Planning Commission, which lasted from 1951 to 2014 and the NITI Aayog from 2015 to 2017, established, implemented, and oversaw the Five-Year Plans. The commission has a nominated deputy chairman who holds the position of cabinet minister, with the prime minister serving as ex-officio chairman. The last deputy chairman of the commission is Montek Singh Ahluwalia. In March of 2017, the Twelfth Plan came to an end.

No more formal economic plans are being prepared since the Planning Commission was disbanded, although Five-Year Defense Plans are still being developed. The most recent period would have been 2017–2022. There is no Thirteenth Five-Year Plan, though. Following is the list of all 12 five year plans of India:

Jawaharlal Nehru, India’s first prime minister, presented the First Five-Year Plan to the Indian Parliament, which required immediate attention. In 1951, the first five-year plan was developed, focusing primarily on the development of the primary sector. The Harrod–Domar model was modified slightly for the First Five-Year Plan.

The Second Plan prioritised public sector development and “rapid industrialization.” The design was based on the Mahalanobis model, which was created in 1953 by Indian statistician Prasanta Chandra Mahalanobis. In order to maximise long-run economic growth, the strategy aimed to find the optimal allocation of investment amongst productive sectors. It made use of cutting-edge operations research and optimization techniques, as well as unique applications of statistical models created by the Indian Statistical Institute.

The Third Five-Year Plan emphasised agricultural and wheat production, but the brief Sino-Indian War of 1962 exposed economic deficiencies and transferred attention to the defence industry and the Indian Army. India and Pakistan fought a war in 1965–1966. In 1965, there was also a severe drought. Inflation arose as a result of the conflict, and the focus turned to price stability. Dam work was still going on. There were also numerous cement and fertiliser facilities erected. Punjab started generating a lot of wheat.

The Fourth Five-Year Plan set the goal of reversing the previous trend of increasing wealth and economic power concentration. It was based on the Gadgil formula, which emphasised steady growth and progress toward self-sufficiency. Indira Gandhi was the Prime Minister at the time.

Employment, poverty reduction (Garibi Hatao), and justice were all highlighted in the Fifth Five-Year Plan. The plan also emphasised self-sufficiency in agriculture and defence. The concept was rejected by the newly elected Morarji Desai administration in 1978. In 1975, the Electricity Supply Act was changed, allowing the federal government to enter the electricity producing and transmission business.

The start of economic liberalisation was highlighted by the Sixth Five-Year Plan. Ration shops were closed and price limits were removed. Food prices and the cost of living both increased as a result of this. Nehruvian socialism came to an end at this point. The Shivaraman Committee recommended that the National Bank for Agriculture and Rural Development be founded for rural development on July 12, 1982. In order to avoid overpopulation, family planning was also expanded.

Because of the economic volatility in India in 1989–91, no Five-Year Plan was adopted. There were just Annual Plans between 1990 and 1992. In 1991, India’s foreign exchange (forex) reserves were depleted, leaving the country with only roughly $1 billion in reserves. As a result of the pressure, the country risked changing the socialist economy. P.V. Narasimha Rao was India’s ninth prime minister and the leader of the Congress Party. He oversaw one of the most important administrations in the country’s modern history, supervising a massive economic transition as well as several national security incidents. At the period, Dr. Manmohan Singh (later Prime Minister of India) began India’s free market reforms, which helped the country recover from near-bankruptcy. In India, it was the start of LPG (liberalisation, privatisation, and globalisation).

After 50 years of independence, the Ninth Five-Year Plan was implemented. During the Ninth Plan, India’s Prime Minister was Atal Bihari Vajpayee. The Ninth Plan aimed to foster economic and social growth by utilising the country’s latent and untapped economic potential. It provided substantial support to the country’s social spheres in order to accomplish comprehensive poverty eradication. The states’ ability to move forward on the path of faster development was also assured by the successful implementation of the Eighth Five-Year Plan. The governmental and private sectors worked together in the Ninth Five-Year Plan to ensure the country’s economic progress.

The Tenth Five-Year Plan’s key goals were: Attain annual GDP growth of 8%, a 5% reduction in poverty by 2007, and meaningful and high-quality employment for at least the additions to the labour force. By 2007, there will be a 50% reduction in gender disparities in literacy and salary rates. A 20-point programme was implemented. Growth target: 8.1 percent — growth achieved: 7.7%, To reduce regional inequities, the Tenth Plan was planned to use a regional rather than a sectoral strategy, For the tenth five years, the government will spend Rs 43,825 crore (US$5.8 billion), etc.

During Manmohan Singh’s tenure as Prime Minister, the Eleventh Five-Year Plan’s key goals were achieved. Its goal was to increase the number of 18–23 year olds enrolled in higher education by 2011–12. It focused on distance education, the convergence of formal, non-formal, distant, and IT education institutions, rapid and inclusive growth (poverty reduction), emphasis on the social sector and service delivery therein, empowerment through education and skill development, gender inequality reduction, environmental sustainability, and increasing the growth rates in agriculture, industry, and services to 4%, 10%, and 9%, respectively.

The Government of India’s Twelfth Five-Year Plan was set to reach a growth rate of 9%, but the National Development Council (NDC) accepted an 8% growth rate for the Twelfth Plan on December 27, 2012. The Deputy Chairman of the Planning Commission, Montek Singh Ahluwalia, has stated that achieving an average growth rate of 9% in the next five years is not achievable due to the deteriorating global scenario. With the plan’s approval at the National Development Council meeting in New Delhi, the final growth target has been set at 8%.

The smooth operation of an economy depends heavily on planning. The Planning Commission was established by the government in 1950 to draught, develop, and implement India’s five-year plans. Economic Growth, Economic Equity and Social Justice, Full Employment, Economic Self-Reliance, and Modernisation were the goals of these five-year programmes.

Ans. No more formal economic plans are being prepared since the Planning Commission was disbanded in 2014, although Five-Year Defense Plans are still being developed. The most recent period would have been 2017–2022. There is no Thirteenth Five-Year Plan, though.

Ques. What was the main focus of five year plan?

Ans. The Planning Commission was established by the government in 1950 to draught, develop, and implement India’s five-year plans. Economic Growth, Economic Equity and Social Justice, Full Employment, Economic Self-Reliance, and Modernisation were the goals of these five-year programmes.

Ques. What is the 13th Five Year Plan of India?

Ans. There is no thirteenth five year plan. Since the Planning Commission was disbanded in 2014, no formal economic plans have been established, while Five-Year Defense Plans are still being developed. The most current time frame would be 2017–2022. However, there is no Thirteenth Five-Year Plan.

Ques. How many 5 year plans were there?

Ans. India had 12 five-year programmes in total. The Narendra Modi-led NDA administration abolished the Five-Year Plans in 2015. As a result, India’s 12th five-year plan is regarded its final five-year plan.