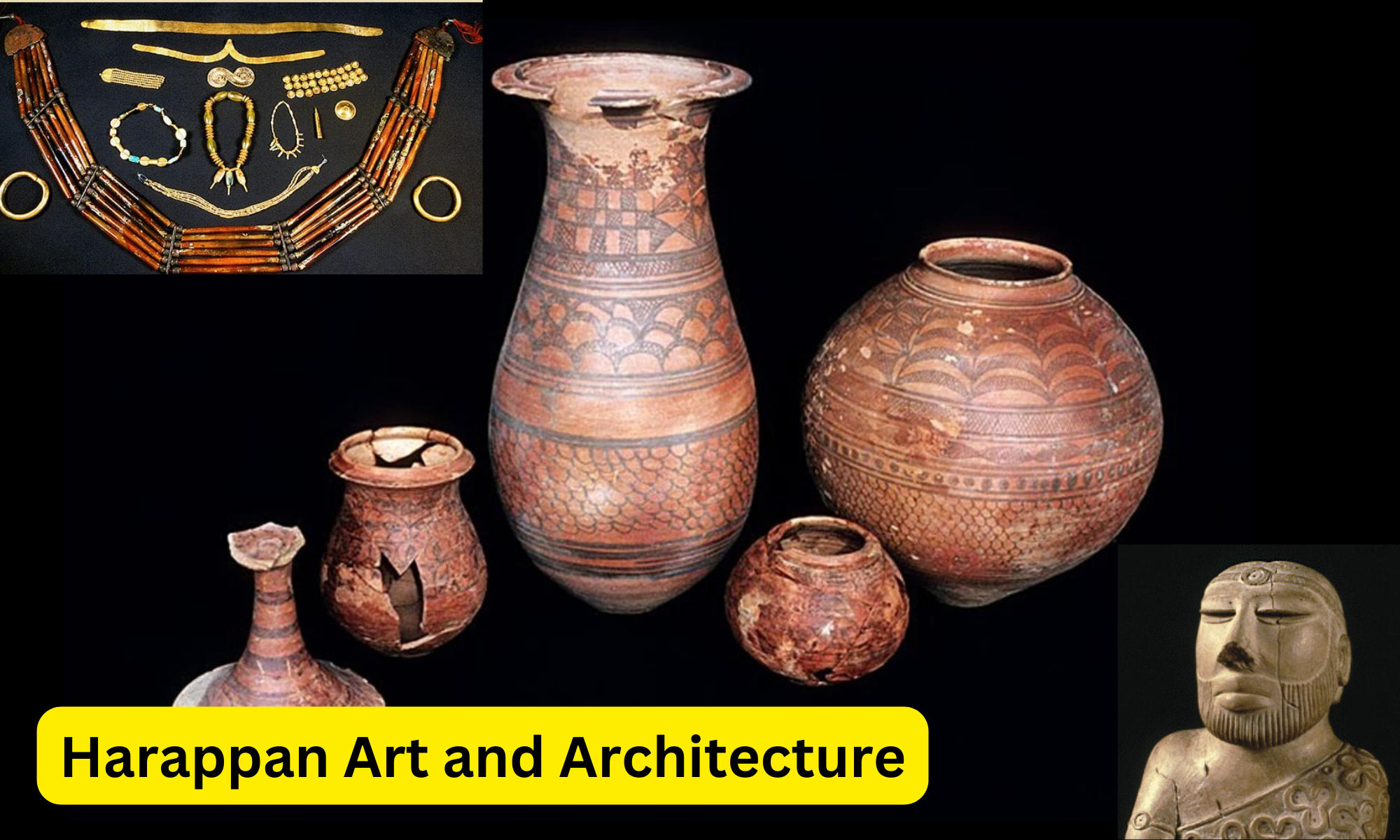 Harappan/Indus Valley Civilization locations were spread across a large portion of Pakistan, northeastern Afghanistan, and northwesterly India. The civilisation thrived along a network of perennial monsoon-fed rivers that once flowed close to the Ghaggar-Hakra, a seasonal river in northwest India and eastern Pakistan, as well as in the alluvial plain of the Indus River, which runs the entire length of Pakistan.

He wrongly assumed that the Harappa ruins had been reported previously during Alexander’s conquest and dated them to a time in recorded history. The site’s remarkable magnitude as well as a number of sizable mounds created by centuries of erosion left a lasting impression on Masson.

The second half of the third millennium saw the development of the arts of the Indus Valley civilisation, one of the world’s first civilizations (Bronze Age). Sculptures, seals, pottery, gold jewellery, terracotta figurines, and other works of art have all been discovered at diverse locations of human habitation. They drew human and animal creatures in a very realistic manner. The modelling of the figures was done quite carefully.

Excellent examples of handling the 3D volume are the stone statues discovered in the Indus valley sites.

discovered at Mohenjo-Daro. Figure of a bearded guy fashioned of statite. The figure, which is thought to be a priest, is covered in a shawl that extends from the left shoulder beneath the right arm. The shawl has a trefoil pattern on it. Half-closed and extended, the eyes appear to be in a focused state of meditation. Medium-sized and well-formed nose.

Accessed in Harappa, produced from red sandstone. For the attachment of the head and arms, the neck and shoulders have socket holes. Legs are fractured. The midsection is slightly protruding, and the shoulders are nicely cooked. One of the beautifully completed and carved works.

Nearly all of the civilization’s key locations employed bronze casting on a large scale. Bronze casting was done using the lost wax process. There are both human and animal figures in the bronze casting. The buffalo, with its raised head, back, and sweeping horns, as well as the goat, are creative standouts among animal representations.

The bronze bull sculpture at Kalibangan and the copper dogs and birds from Lothal demonstrate the popularity of bronze casting throughout the Indus Valley. Even after the Indus Valley Civilization, metal casting was still practised by late Harappan, Chalcolithic, etc. populations.

In Gujarati sites and Kalibangan, the terracotta sculptures are more lifelike. A few terracotta statues of bearded men with coiling hair may be seen standing firmly erect with their legs slightly apart and their arms parallel to their sides. This person’s recurrence in the exact same place would imply that he was a deity.

Additionally, a terracotta mask of a god with horns was discovered. Terracotta was also used to create toys such wheeled carts, whistles, rattles, birds, animals, game players, and discs. The terracotta statues that depict Mother Goddess are the most significant.

Numerous seals were found at the sites; they were typically made of steatite, though they were also occasionally made of agate, chert, copper, faience, and terracotta. The seals featured beautiful representations of various animals, including a unicorn bull, rhinoceros, tiger, elephant, bison, goat, and buffalo.

The main goal was commercial in nature. They served as amulets as well, being worn by their owners like possibly current ID cards. A 2 x 2 square inch seal was the typical Harappan size. Each seal is written on in a pictographic script that hasn’t been decoded. Additionally, some seals were discovered in Gold and Ivory.

Very few of the extremely beautiful wheel-made items produced by the Indus Valley pottery are handcrafted. More people use plain pottery than painted pottery. Red clay is typically used for plain ceramics, either with or without a fine red or grey slip. The glossy black paint used to decorate the black painted pottery is applied in geometric and animal patterns over a fine layer of red slip.

The Harappan men and women adorned themselves with a wide array of jewellery made from every imaginable material, including bone and baked clay in addition to precious metals and gemstones. Both sexes frequently wore white armlets, finger rings, fillets, and necklaces.

Necklaces made of gold and semiprecious metal stones, bracelets and beads made of copper, gold earrings, and headdresses were among the jewels discovered at Mohenjo-Daro and Lothal. At Farmona in Harappa, a cemetery has been discovered where the dead were interred with ornaments.

There were thriving bead factories at Chauhudaro and Lothal. Some beads were created by cementing two or more stones together. Animal models were also created, particularly monkey and squirrel forms for usage as pin heads and beads.