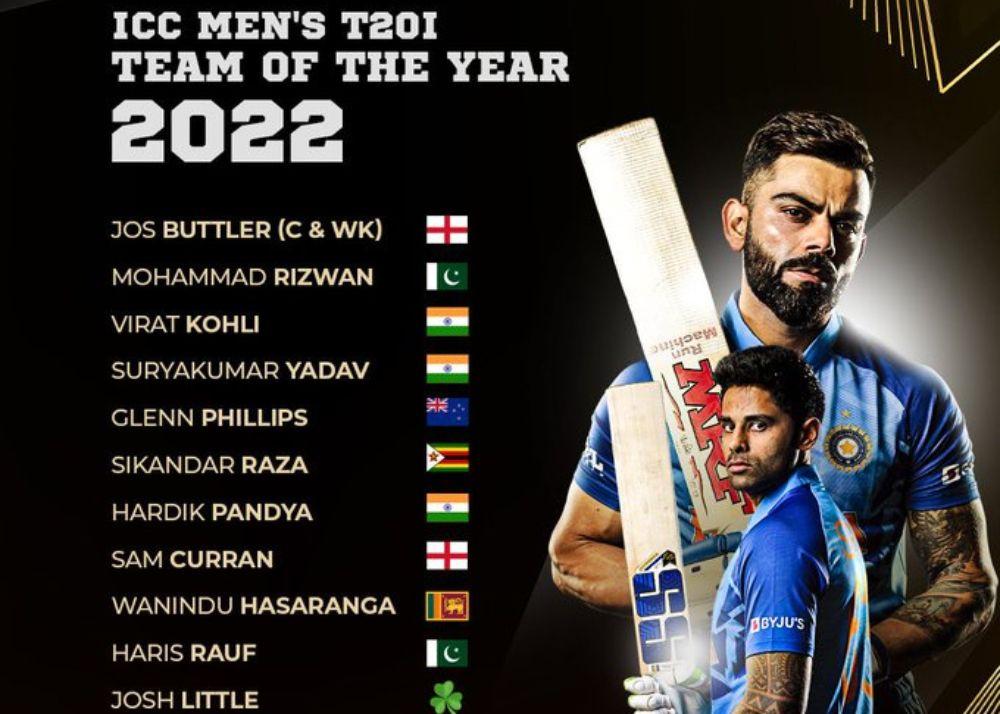 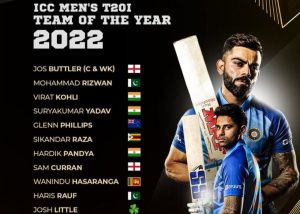 The International Cricket Council Team of the Year recognises 11 outstanding individuals who have impressed one and all – be it with the bat, the ball or their all-round exploits in a calendar year. Here, we take a look at 11 players who make the cut in the shortest format of the game for men’s cricket. Among them were India’s star players including the likes of Virat Kohli, Suryakumar Yadav and Smriti Mandhana, among others.

Men’s T20I team of the Year 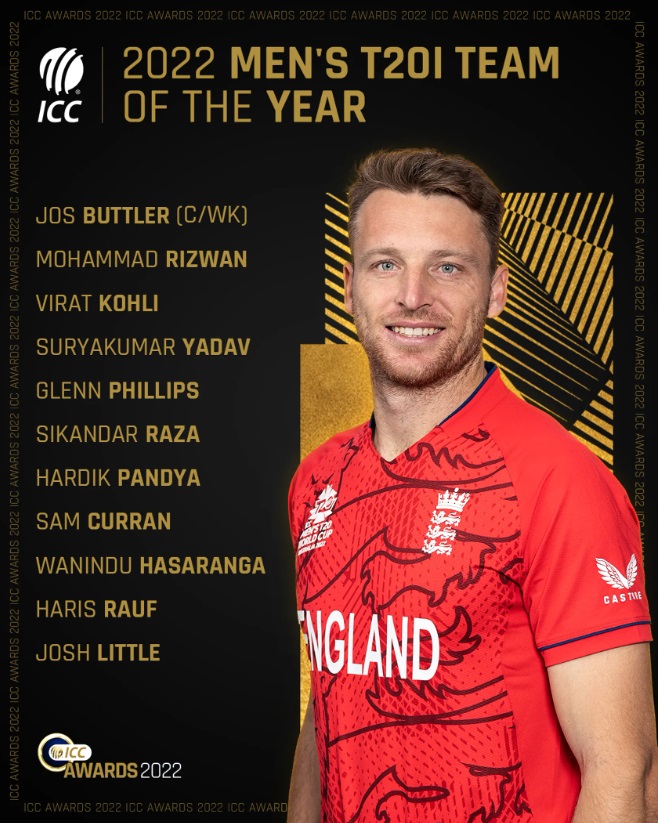 1. Jos Buttler- Jos Buttler led the England team to their second T20 World title when they defeated Pakistan in the final in Australia. The English captain scored 462 runs in 15 innings in 2022 with a Strike rate of 160.41.

3. Virat Kohli- India’s Kohli found back his form when he smashed a hundred against Afghanistan in Asia Cup 2022. He followed that up with a magical knock vs Pakistan in T20 World Cup.

5. Glenn Phillips- The Kiwi batter Phillips also had a year to remember as he amassed loads of runs in the middle order. The New Zealand batter scored 716 runs in 19 innings at a 156.33 Strike Rate.

6. Sikandar Raza- Zimbabwe’s Raza was the cornerstone of his side in their T20 World Cup campaign. He was the 4th highest run-getter in 2022 and was the second-highest wicket-taker for his country in T20 World Cup. Raza scored 735 runs and took 25 wickets in 2022. He claimed 10 wickets in World Cup.

7. Hardik Pandya- India’s Pandya, who is being looked upon as long-term captain in limited overs for the team, had a memorable 2022. He scored 607 runs in 27 matches and scalped 20 wickets.

8. Sam Curran- England’s Sam Curran had a brilliant T20 World Cup in 2022. He displayed class with the bowl and was chosen as the Player of the tournament. Curran took 25 wickets in 19 matches and scored 67 runs.

9. Wanindu Hasaranga- Sri Lanka’s Hasaranga proved his ability as a decent all-rounder in T20Is. He was clinical with the bowl as he took 34 wickets in 19 games and scored 154 runs with the bat.

10. Haris Rauf- Pakistan’s Rauf was breathing fire in the T20 World Cup. He scalped 31 wickets in the year in 23 innings including his 8 scalps in the World Cup.

11. Josh Little- Ireland’s Little has also found his name on the list. The left arm claimed a hat trick in the World Cup and took 39 wickets in the complete year in 26 innings.

Women’s T20I Team of the year 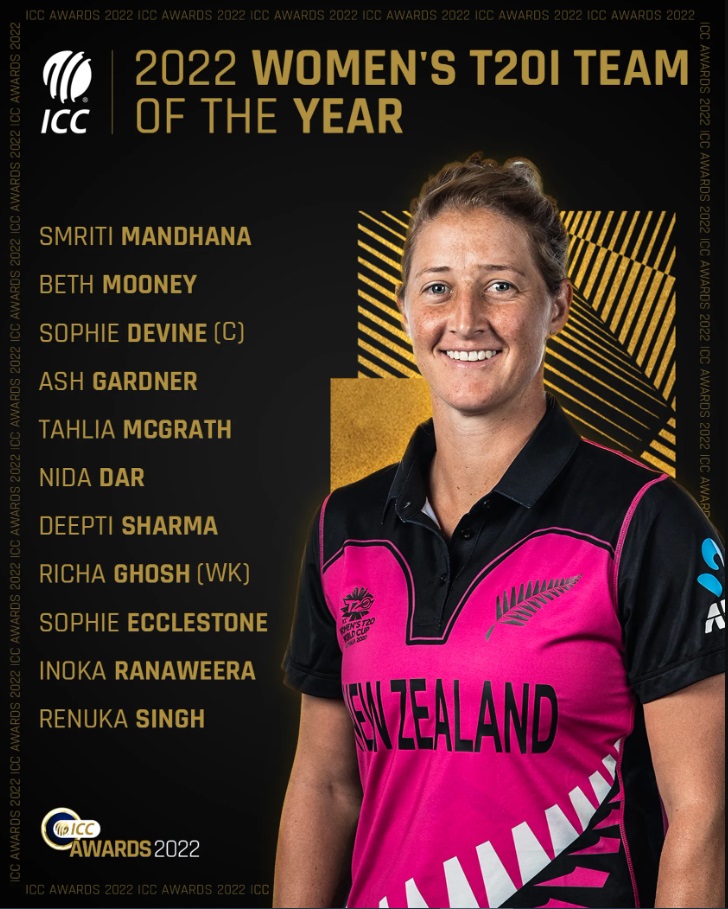 1. Smriti Mandhana- India’s Mandhana had a brilliant year with the bat for India. The Indian scored 594 runs with the bat at a Strike Rate of 133.48, including 5 fifties in 21 innings. She made two fifties in India’s Silver medal-winning campaign in Commonwealth Games 2022.

2. Beth Mooney- Australia Mooney was also among the players to watch out for in 2022. She smashed 449 runs in just 14 matches at a Strike rate of 134.43. She helped Australia win Gold in Commonwealth Games.

3. Sophie Devine- New Zealand’s Devine is the captain of ICC’s T20I Women’s team of the year. Devine contributed well both with the bat and the ball. She scored 389 runs and took 13 wickets in the year.

4. Ash Gardner- Another Australian in the list is Gardner. The hard-hitting Aussie is a great player in the middle order. She smashed 216 runs in the year at a Strike Rate of 152.11.

5. Tahlia McGrath- Aussie all-rounder McGrath is chosen at No.5. She made the list on the back of some brilliant knocks. She scored 435 runs and took 13 wickets in the year.

7. Deepti Sharma- India’s Sharma, was crucial for India both with bat and ball. She scored 37 runs and took 29 wickets. She took 13 wickets in the Women’s Asia Cup as India lifted the title.

8. Richa Ghosh- India’s Ghosh was aggressive with the bat in the death overs and sent the bowlers to the cleaners in 2022. She hit 259 runs at a Strike Rate of over 150 as she stood out for India.

10. Inoka Ranaweera- Sri Lanka’s Inoka Ranaweera adds variety to the bowling group with her left-arm orthodox spin. She also had a great 2022 as she took 27 wickets in 19 games.

11. Renuka Singh- India’s Singh shined for her team in 2022. She took 22 wickets at an average of 23.95 as she impressed many with her pace and swing. Singh was also crucial for India in Commonwealth Games and Asia Cup 2022.